The complete state estimate consists of a set of ocean, sea-ice, air-sea flux, and atmosphere state variables that are the output from a free-running ocean and sea-ice general circulation model.

The lat-lon-cap (llc) is the decomposition of the spherical Earth into a Cartesian curvilinear coordinate system . It is a topologically non-trivial cubed-sphere rendering in the northern hemisphere and a dipolar grid in the southern hemisphere. Between 70°S and ~57°N, model grid cells are approximately oriented to lines of latitude and longitude. A special Arctic “cap” is situated north of ~57°N.

The Cartesian curvilinear coordinate system is divided into 13 tiles, each consisting of 90x90 grid cells in the horizontal and 50 vertical levels. Horizontal model grid resolution varies spatially from 22km to 110km, with the highest resolutions at high latitudes and lowest resolution in mid latitudes. Vertical grid spacing increases with depth from 10m to 456.5m. The bottom of the deepest model grid cell is 6145m below the surface. 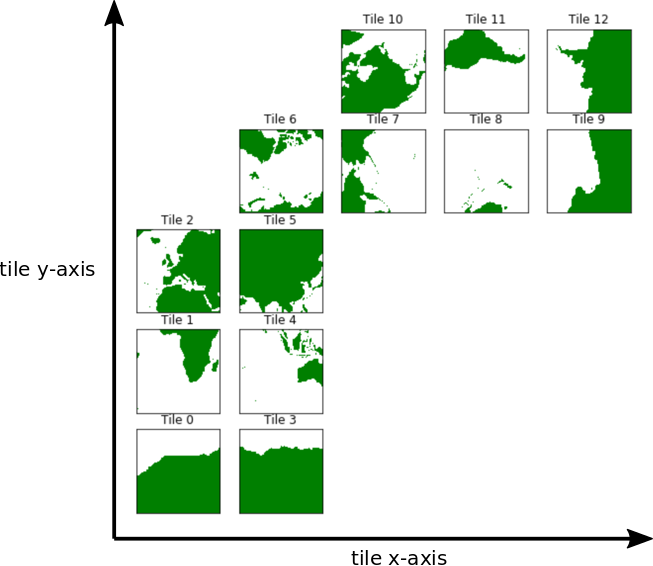 Available fields on the llc90 grid¶

Select monthly-average fields from the native lat-lon-cap model output have been interpolated to a more user-friendly 0.5° latitude-longitude grid.

Because the state estimate fields are the output from a free-running ocean model, users can re-run the model to generate custom output on the native lat-lon-cap model grid. Instructions for doing so are provided here: https://ecco.jpl.nasa.gov/drive/files/Version4/Release3/doc/v4r3_reproduction_howto.pdf